Skip to content
Home/LGBTQ Genealogy – Part 13a
Previous Next

At a recent LGBTQ Genealogy presentation in Ohio, a participant reminded me of another genealogical record source that may lead to clues on LGBTQ history – medical records. Like Police and Prison Records discussed in Part 13, medical records are not generally available to the public. But with searching and luck, some records can be found. The specific kind of medical records we’d look for are Asylums, Mental Health Institutions, or State Hospital where LGBTQ folk were committed for deviancy.

Remember the American Psychiatric Association only removed Homosexuality from the Diagnostic and Statistical Manual of Mental Disorders (DSM) in 1973.[1] For 100 years prior, LGBTQ people were “treated” for their peculiarities by forced admission to mental institutions to undergo barbaric, non-evidence-based psychiatric practices resembling torture. Records from those institutions may survive online or offline.

Ancestry has a database for the California State Hospitals in Mendocino, Sonoma, and Stockton which are now part of the State Archives. It didn’t take me long, scrolling through California, U.S., State Hospital Records, 1856-1923 to find a record for what seems to be a gay man in 1892. The record for William Henry Harrison Lippincott, a 54-year-old, widowed gardener from New Jersey, shows he was committed by a judge to the Mendocino State Hospital from Monterey County on 20 January 1892. His classification was “Recurrent Mania,” and the history reads, “Has sexual peculiarities. Goes into the streets partly dressed, throwing kisses at the men and insults women. Is combative, and is soft on the woman question.”[2]

I have no idea what “soft on the woman question” means. If you do, please add it to the comments below.

Though this snippet of Mr. Lippincott’s behavior doesn’t give us the full context of his circumstances, today I can envision a fabulous drag queen engaging in the same behavior, complimenting men while being catty to women, without any fear of being apprehended. But in 1892, Mr. Lippincott was committed with others who had paranoias of being poisoned, hearing voices of the Virgin Mary, confessed to killing spouses, and other serious behaviors. These records are an interesting read of human psychology.

Homosexuality is not and has never been a mental illness. Yet, living in fear of being committed and “diagnosed” kept many hidden in the closet. The cost of not being your true self, and apprehensive about discovery, could lead to mental illness. LGBTQ folk have struggled with alcoholism, substance abuse, and suicide because of the necessity to live clandestinely. Though I write about these circumstances in the past tense, I recognized that LGBTQ people around the globe still struggle with addiction, depression, isolation, and lack of freedom. The necessity to stay hidden is still with us around the world.

Psychiatric records, like the example above, and other medical records can be clues to establish sexuality when putting together an LGBTQ ancestors’ life story. 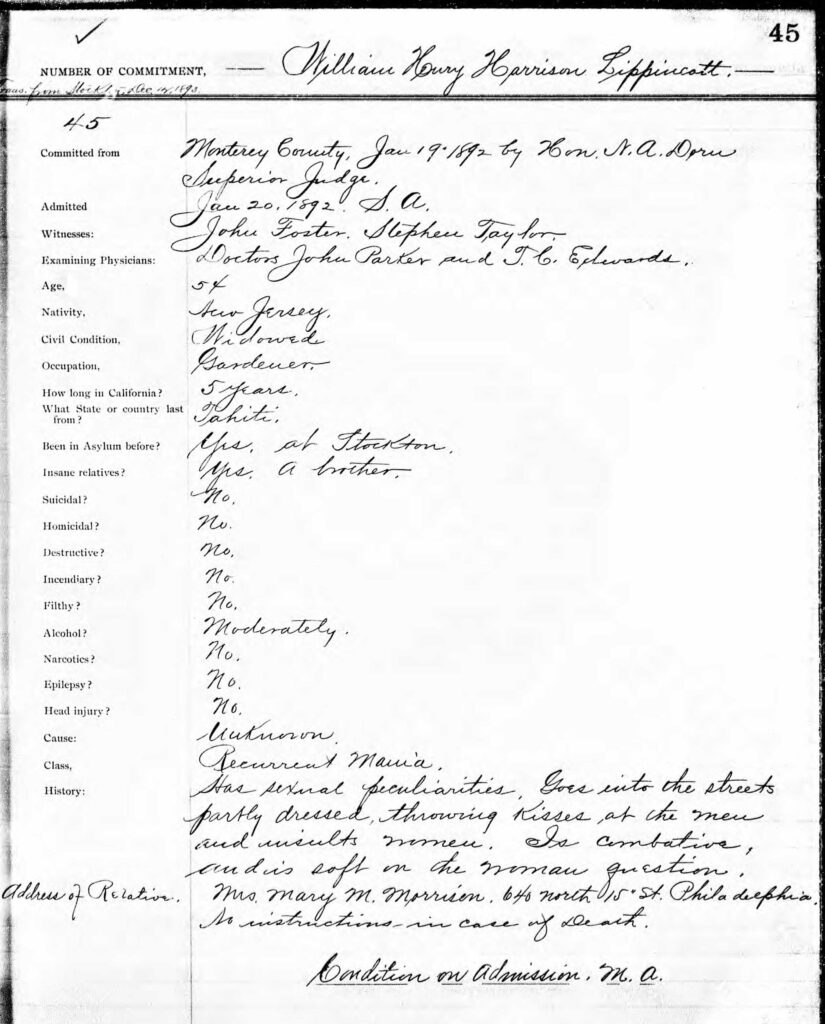