May is for mother’s day, so I am deviating from my LGBTQ Genealogy series this month to share some of my own genealogical writing. This is a profile of my maternal great grandmother, Antonia. I was lucky to meet her a couple of times. Once when she traveled to San Francisco for a visit and then again when my family visited Nicaragua in 1980. Antonia was a formidable matriarch, who led an independent life created by her own iron will. The information presented here has no record citations, but comes from the oral history of my family, interviews with my mother, grandmother and other descendants of Antonia.

Antonia had three biological children in her twenties.

The father of Antonia’s three children was Crisanto ZELAYA Rosales (b. 1892 Nicaragua; d. 15 Jun 1973 La Trinidad, Nicaragua (age 81); son of Leandro ROSALES and Carmen ZELAYA).  Crisanto and Antonia lived together for some years, but they never married. Their relationship broke up around 1919 and my grandmother, Cecilia, did not see her father again until she was 12 years old.

In Spanish cultures, people traditionally have 2 surnames – the paternal surname followed by the maternal surname. Children of unmarried couples would take the maternal surname first. If Crisanto and Antonia had married, their children would be known as Zelaya Martínez, and not the other way around. Note that Crisanto’s last names were also flipped to a maternal-paternal order which indicates his parent’s marital status at the time of his birth.

This Spanish tradition of dual last names can be very helpful for genealogists, but it can be confusing in cultures that are unaware of this tradition. When my grandmother immigrated to the United States in 1961, she signed her name as Cecilia Martínez Zelaya; therefore, she was known in this country as Cecilia Zelaya.

Crisanto ZELAYA was an importer of goods and traveled throughout Nicaragua in his truck delivering and trading goods. He was a gambler, a night-club owner, and loved doing cross-word puzzles. Crisanto had many lovers and many children over his lifetime, which was common for men in Nicaragua. His first child, that I know of, was with Antonia when they were both 21 years old. His last child was born when he was 78 years old.  Crisanto never married. He kept a “little black book” of his sexual liaisons. Whenever a young person would approach him to say, “I think you are my father”, Crisanto would consult his book to see if it were possible. Crisanto fathered children with at least three girls age 13 to 15 years of age, which was tolerated in his culture and time in history.

Antonia’s second long-term relationship was with Diego GONZALEZ. Diego and Antonia also never married. They had no children together, but Diego brought with him Roberto GONZALEZ, a nephew. Antonia adopted Roberto as her fourth child. Diego’s time with Antonia is significant in my family story because he taught Antonia’s sons, Augusto and Arnoldo, the art of photography. The boys opened a portrait studio in Granada, Nicaragua where they sold cameras, film and developing services. Their sister Cecilia would colorize photos with watercolors and Antonia did the accounting.

Even though her sons were married with children of their own, Antonia gave them an allowance from the portrait studio. She controlled the business finances and saved enough to buy a house on “La Calzada” boulevard in Granada in 1954, 2 blocks from Lago Nicaragua. There she kept a large garden with lemons, avocados, bananas, tomatoes, bell peppers, zucchinis, oranges and more. She loved plants and everything she planted grew. Antonia always kept chickens, dogs and had a monkey named Julie. The monkey would often escape the backyard and Antonia would have to reimburse neighbors for damages.

Antonia also earned as a weaver of wicker chairs and furniture, sewing and baking. She did the weekly baking for the Jesuits of Colegio Centro America in a charcoal burning oven she built herself that looked like a big dark cave.

In addition to controlling her sons’ finances, Antonia extended her matriarchal influence on everyone in the family. Her daughter married but her husband left the marriage due to Antonia continued control over Cecilia. Cecilia never officially divorced because she was a devout Catholic. After the marriage dissolution, Cecilia and her two children lived with Antonia. My mother grew up in Antonia’s house and tells many stories of her grandmother’s iron fist. Antonia selected my mother’s spouse and chased away any sweethearts she fancied.

Antonia was a devout Catholic who attended mass every day and prayed the Rosary. Her religiosity is contradictory to never marrying either of her partners. Perhaps living in a culture ruled by philandering men, Antonia chose not to marry avoiding the encumbrance of a man. She survived the U.S. installed dictatorship of Anastasio Somoza and the Sandinista Revolution. Despite social and politcal stresses, Antonia controlled her own life’s direction, through personal strength, and built a durable foundation for herself and her large extended family.

Antonia is buried in Cemeterio de Granada in Granada, Nicaragua. Her tombstone reads, “Here your remains, There your soul with God, Remembered by your children and grandchildren”. [1] 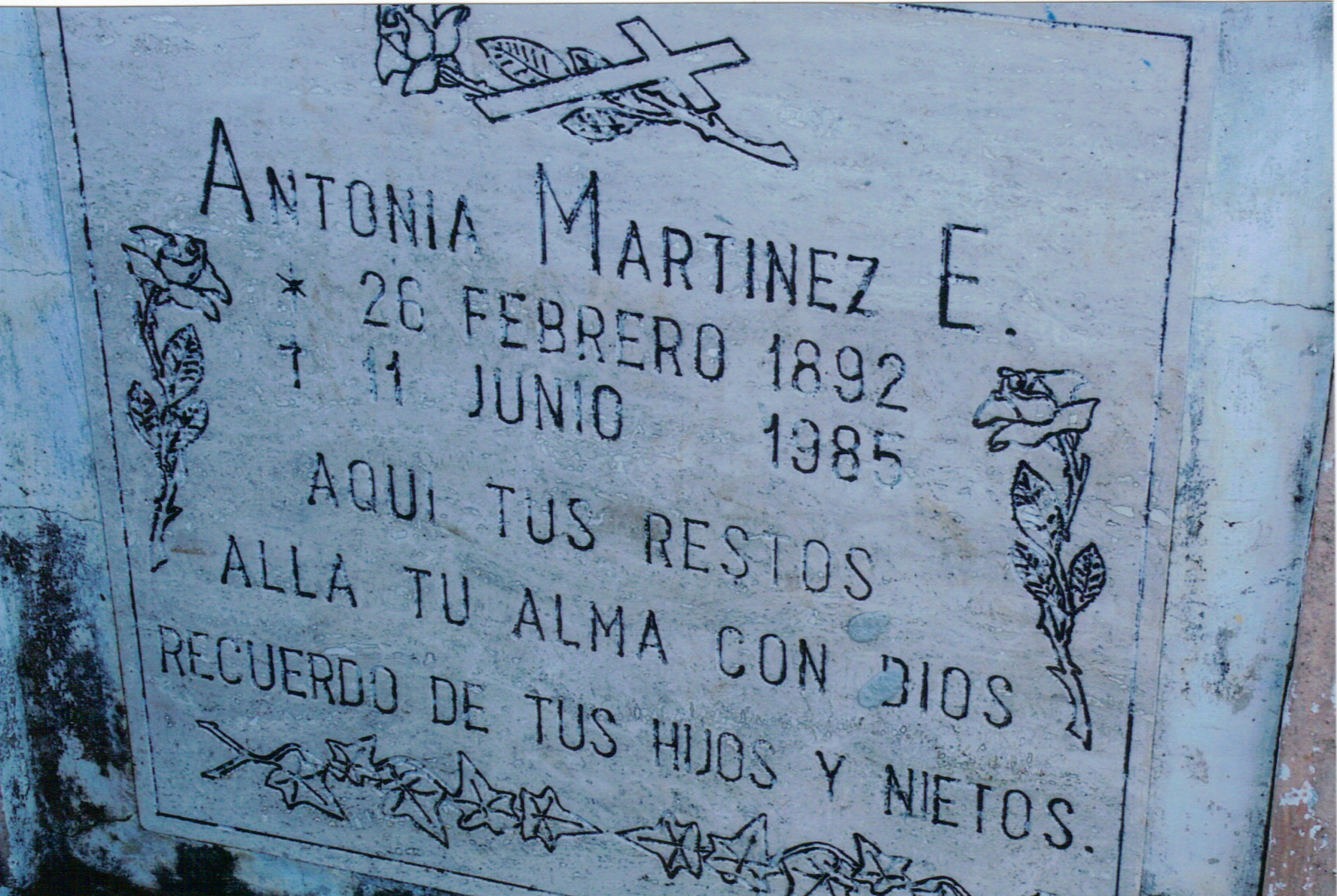