From Domestic Partnership to Marriage

In August 1979, gay rights activist Tom Brougham proposed a new category of relationship called “domestic partnership” to address the inequality of job benefits only extending to heterosexually married couples.  Tom and a group of dedicated LGBTQ activists, which included my husband Leland Traiman, brought the concept of Domestic Partnership to the Berkeley School Board, then to Berkeley City employees. From Berkeley, the idea spread to San Francisco, then to corporations, then nationally, then internationally. Civil Union is another term for the same idea.

Registering for a domestic partnership was a way of documenting a relationship when same-sex marriage was forbidden. That document could then be used to qualify for corporate or municipal spousal benefits.  This is a very brief timeline of domestic partnership adoption.

In 2012, Jim Chambers’ released a documentary capturing interviews from that first grassroots LGBTQ group in Berkeley, Ca. This is a vital documentary for LGBTQ historians.

Check with local municipalities or state governments on their privacy policies around DP records. Domestic Partnerships can also be ended by filing termination paperwork. These records may also be available to the public.

Adoption of Domestic Partnerships around the globe softened world opinion toward acceptance of same-sex marriage.

This is a recent world map from Wikipedia commons showing countries that allow Same-Sex Marriage, Domestic Partnerships, and Civil Unions today. This map is frequently updated. 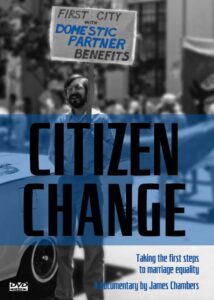 A big thank you to everyone who fought, and are still fighting, for our rights to marry around the world and through the years.