Skip to content
Home/Geraldine, Who Are You? – Part 2
Previous Next

[This article was originally published in The California Nugget, Spring 2018 edition.]

This seemed like a foster home. The Bouldrys were listed with a biological daughter and four “boarder” children. Three of the children are under the age of 3. The family group just above the Bouldrys on the same census page also had three very young boarders. Geraldine’s birthplace is written as Massachusetts, as are the birthplaces of both of her parents. This census record agrees with the information on Geraldine’s birth certificate.

Why was Geraldine not living with her parents?

In 1930 Geraldine’s father, Lawrence Healy, was living with 22 male lodgers in a shoe factory on Ward Street in Brockton. [14] His profession was again an automobile painter.

Geraldine appears in the 1947 Brockton, Massachusetts city directory [20] at 90 Gladstone Street, the same address as listed in her 1946 Brockton High School Yearbook, the Brocktonian. [21] Her father’s WWII draft registration card [22] gives his address as 90 Gladstone Street and his contact person as Miss Geraldine Healy; she would have been 14 years old. I have found no other record of Geraldine living with either of her birth parents during her childhood in Brockton. From her marriage license application, she was living in Fort Lauderdale, Florida at the age of 19, having apparently left Brockton soon after the city directory entry was recorded.

I backtracked to the 1930 U.S. Census to look for 90 Gladstone Street and found a Mason family. Ernest and Margaret Mason were living with their three children and two boarder children under the age of 4: another foster home. Geraldine’s documented address from 1942 – 1947 was a foster home in the 1930 census.

Because of the recurring theme of child boarders, I wanted to know more about the foster care system in Brockton in the Depression era. I returned to the Association of Professional Genealogists to find someone in Massachusetts that might know about this period. Among the several genealogists listed, I found the name, Tricia Healy Mitchell, and it becomes obvious whom to choose. Although Tricia turned out not to be a relative, she was an immense help and pointed me to an article in The Irish Ancestral Research Association (TIARA) Fall 2017 newsletter titled, “Children’s Social Welfare Records at the University of Massachusetts Boston” by Jessica Holden. [25] The article documented several aid societies and orphanages in the Boston area and where surviving records are housed. Tricia agreed to spend several hours combing through the records at the Joseph P. Healey Library at Boston University, but unfortunately, no trace of Geraldine was found.

By continuing research on the family, I was able to locate two additional living family members for Rodger H. Clapp; his 91-year-old sister living in Boca Raton, Florida and his youngest son living in Texas, a half-brother to Rodger Jr. I contacted the son, through LinkedIn and was very happy when he agreed to speak with me. He had no information on his father’s first wife, Geraldine. The family had no contact with her since she abandoned her young son and husband in 1950. This was new information!

Rodger Jr.’s half-brother had lost contact and did not know much about his brother’s life. I filled him in on what I knew. Rodger Jr. married his first wife in 1970 while in the Navy in Hawaii. They moved to San Diego, California. In 1979 he abandoned his wife and twos sons, aged 7 and 2. His sons never heard from him again. Rodger married again in 1979 and had a third son. In total Rodger had three biological sons and one stepson from his third marriage.

Rodger Sr.’s elderly sister in Boca Raton was very welcoming and spoke with me at length. She had first-hand memories of her brother’s first wife as a nice person. But without forewarning, Geraldine dropped off her infant son at her mother-in-law’s house one morning in 1950 and never returned. Rodger Sr. had reported no problems in the marriage. Rodger Jr. was less than a year old when his mother walked out on the family. Why she left will remain a mystery because all the players are deceased. But this explained why Rodger Sr. was the one to file for divorce and why he received custody of his son in 1952.

What happened to Geraldine after 1950? Regular online searches yielded no clues on this mystery. Did she stay in Florida? Was she still alive in her 90’s? If she returned to Massachusetts, then to what family? Did she remarry? Did she have other children who would be related to my son?

A clever search on the Social Security Death Index unlocked the final mysteries of Geraldine’s life. I searched the SSDI database with an exact first name, no last name, and the exact birthdate of 9 September 1928. I found five Geraldines born on that day who had been reported deceased to the Social Security Administration. [See Image 5]

The first two Geraldines had their Social Security cards issued in Illinois. The third one was easy to track to a maiden name that was not Healy. The fourth one’s card was issued in New York State. This left the fifth candidate as the best possibility, with a card issued in Massachusetts before 1951.  Was Geraldine M. Harding the same person as Geraldine May Healy? I searched recent newspapers for an obituary without success. I searched PeopleFinders.com and BeenVerified.com for Geraldine Harding and discovered that she was the wife of James E. Harding.

I added James to my Ancestry tree as Geraldine’s spouse and ran a general search on his name. I immediately got rewarding confirmation. James Edward Harding married Geraldine May Healy on 24 June 1983 in Miami, Florida. [26]

I ordered the death certificate for Geraldine M. Harding [27] from the Florida Department of Health and Vital Statistics. The document further confirmed Harding as the correct Geraldine because her parents were given as Lawrence Healy and Ethel Unknown. [See Image 6] The certificate gave one more very important piece of information: The informant of the death was stepson. His address in Boca Raton was also on the death certificate. A stepson?

I found the stepson on the Florida voters website [28] and confirmed his address. The site also gave a phone number. I left a message and to my surprise and delight, he called me back. He didn’t know much about his stepfather’s second wife, but he said she didn’t have any other children, had retired from AT&T and loved to clog dance. He knew that she had a son from a previous marriage, but she never talked about that child.

Geraldine May Healy was born on 9 September 1928 in Brockton, Massachusetts to Lawrence Healy and Ethel Van Blarcom. Her early life seems to have been spent in foster care. Upon reaching the age of majority, Geraldine left Massachusetts for Florida and at the age of 19 married Rodger Houghton Clapp in 1948 in Georgia. Two years later they had a son, Rodger Corderey Clapp. Before her son was a year old, Geraldine left her husband and child without warning or explanation.

Her son, Rodger grew up in Fort Lauderdale, Florida with his father, stepmother, and stepsiblings. His family has reported that he never fit in and was a rebellious rule breaker. Rodger left home in 1968 to join the Navy and while serving in Hawaii married in 1970. In 1979, like his mother, Rodger abandoned his wife and two young sons and was not seen by the family again.

Rodger Jr.’s oldest son fathered a child in 1999 and agreed to an open adoption. He refused any contact after birth.

Did the fact that Geraldine Healy apparently spent most or all of the Great Depression in foster homes have multigenerational consequences? 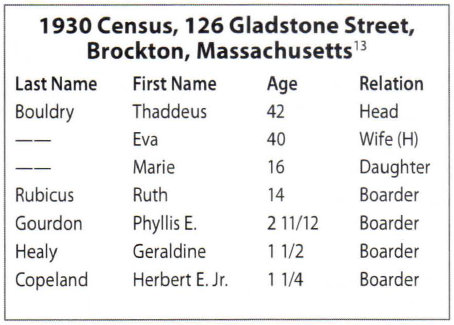 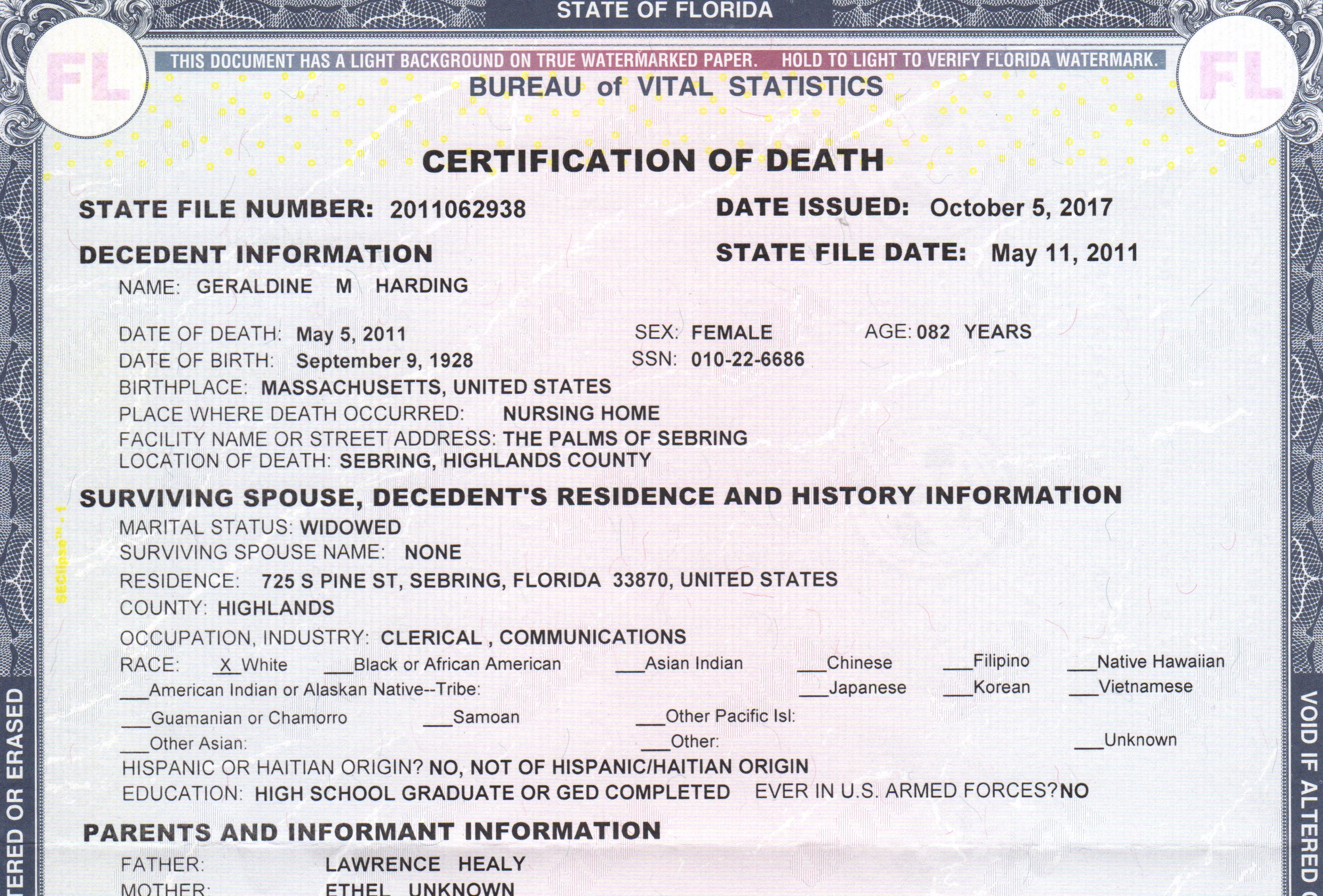