Skip to content
Home/Geraldine, Who are You? – Part 1
Previous Next

[This article was originally published in The California Nugget, Spring 2018 edition.]

Eighteen years ago, my husband and I adopted a baby boy at birth. He has brought much joy into our lives, including the joy of doing his birth family’s genealogy. My son is a Mayflower descendant of Francis Cooke and Samuel Warren. But the story I will tell here is about piecing together the mystery of his paternal great-great-grandmother, Geraldine Healy (1928-2011). With each discovery, a multigenerational child-abandonment history was revealed.

The first piece I started with was a Who’s Who in the West [1] entry for my son’s biological paternal grandfather, Rodger Corderey Clapp (1950-2012). (The Who’s Who entry misspelled Corderey both times.) [See Image 1]

The short biography gave his parents’ names, but it also presented me with the hurdle of discovering Rodger Jr.’s biological mother.  Did Rodger have a stepmother because of a previous divorce, or had his mother died? The only Florida marriage index entry I found online was for Rodger Houghton Clapp marrying Simone Chouraki in 1952 [2]. I could not find a record Rodger Sr.’s first wife. It was also possible they had not been married and that no record existed.

Rodger Sr. was born on 13 September 1921 in Yonkers, Westchester, New York [3]. Other records and newspaper articles show that he lived in Yonkers until early adulthood. After military service, he settled in Fort Lauderdale, Florida in 1948 [4].  Searching online New York Marriage indices also did not uncover a prior marriage for Rodger Sr. before he relocated from New York.

What clues could I find by turning to his son’s birth in 1950 in Fort Lauderdale? Rodger Jr. was 2 years old when his father re-married. The state of Florida does not release birth records unless the request is from the parent, guardian, legal representative, or child named in the certificate, or by court order [5]. For quite some time I was at a dead end in discovering Rodger Jr.’s biological mother’s name.

To find his biological father we had to contact other biological relatives near San Diego, California. The San Diego group included an uncle, a granduncle, and a great-grandmother. They were warm, inviting and delighted to learn more about our family. They had been unaware of our son’s existence prior to our correspondence. We’ve now traveled twice to spend holidays with this branch of our extended family. This relationship has also been a genealogical treasure.  An uncle’s baby book unlocked the information I had been seeking for years. Rodger Jr.’s mother was named Geraldine Kelly.

An online search for Rodger H. Clapp and Geraldine Kelly yielded a 1952 Broward County, Florida divorce index entry [6]. The Baby Book could be corroborated at least for Geraldine’s first name, but her last name was shown as only as Clapp. No other information was available in the index, and a general search for Geraldine Kelly gave too many results without direction.

I wrote to Florida Department of Health, Bureau of Vital Statistics for the divorce record in hope of finding more information beyond the index available online. Several weeks later I received the divorce document, [7] which provided the following:

Through FamilySearch Wiki, I determined the repository for the marriage record [9] was the Camden County, Georgia, Probate Court. I requested the record and received a County of Camden Marriage License Certificate confirming Rodger H. Clapp and Geraldine May Healy (not Kelly) were married on 1 Jun 1948. Fantastic! I now had Geraldine’s correct name, but the certificate had no other details. I was hoping to learn Geraldine’s age, birth place, and parents’ names, but this certificate was ceremonial in format, not informational. Searching online records for Geraldine May Healy yielded some results but I had no way of confirming which records were correct.

The Camden County Probate Court was my best lead. I called the court and explained my genealogy quest, asking if they had any more information about this marriage. The clerk said there might be more information on the marriage license application, but those records are not released. Feeling thwarted, I thank her for her time.

Several weeks later, still at a dead end and unable to positively identify the correct online records, I decided to get help. Through the Association of Professional Genealogists, I asked Don Evans in Georgia if he could obtain the marriage application from Camden County. Don called the court and was told he could obtain the application with an additional $10 money order. I confirmed with the court what Don had reported and also confirmed that the application would have the information I sought – birth date, birth place, parent’s names. The clerk said that all the information was there, but it was difficult to read in faded pencil.

A week later the application [10] arrived with the following information: [See Image 2]

The application did not list a birth place or birth date, but there is enough information to lead to an online index entry for a Geraldine May Healy born in Brockton, Massachusetts in 1928. [11] The online Massachusetts Birth Index does not list parents, but this was a very strong lead. I wrote requesting the birth certificate from the Department of Public Health, Registry of Vital Records and Statistics in Massachusetts, which does not have the same restrictions as Florida. [See Image 3]

The birth certificate [12] had the following information:

I had identified Rodger C. Clapp’s biological mother and his maternal grandparents! The mystery posed by the Who’s Who article was solved using paper records from several offline repositories.

[This article will continue next week as I find out more about Geraldine’s life, the Massachusetts foster care system, and the story behind “Extreme Cruelty”.] 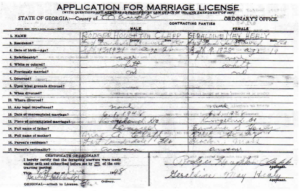 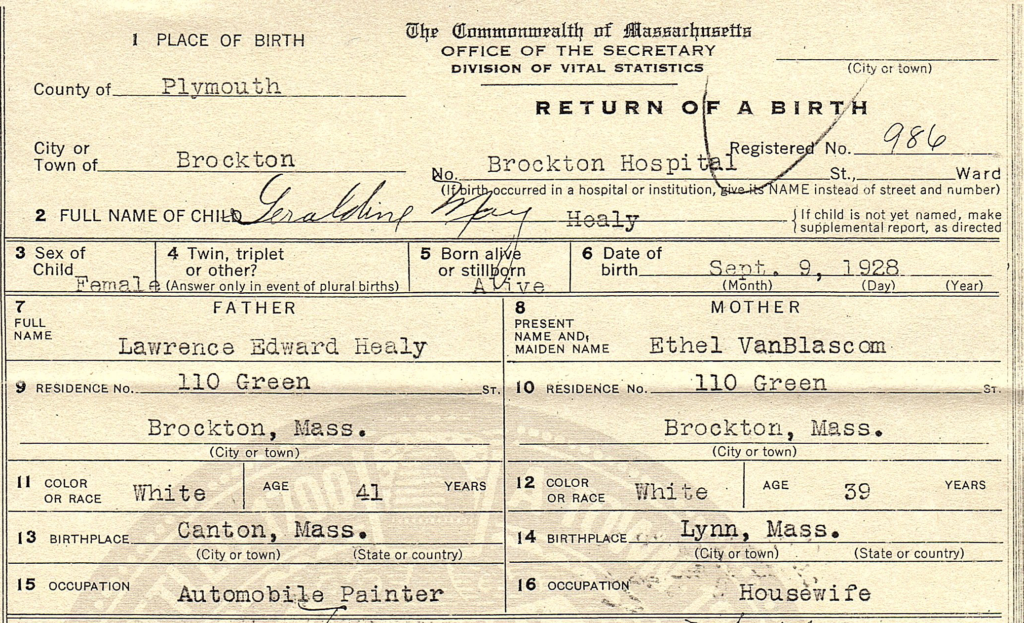