This month, on the 28th of June, we mark the 50th anniversary of the Stonewall Riots in Greenwich Village, New York. Stonewall was the watershed event sparking the modern gay rights movement. Our planet has come a long way in 50 years in acceptance of Lesbian, Gay, Bisexual, Transgender and Queer (LGBTQ) folk. And there is still much that needs to be done around the world.

A couple of months ago I started writing about finding LGBTQ folk in newspapers. The example I gave was of a police raid on a gay club in the Chicago area. Here is another headline of a gay club being raided by the police. The headline in the New York Daily News reads, “HOMO NEST RAIDED – QUEEN BEES ARE STINGING MAD”. The author, Jerry Lisker, writes in very derogatory language.

“She sat there with her legs crossed, the lashes of her mascara-coated eyes beating like the wings of a hummingbird. She was angry. She was so upset she hadn’t bothered to shave. A day old stubble was beginning to push through the pancake makeup. She was a he. A queen of Christopher Street.

Last weekend the queens had turned commandos and stood bra strap to bra strap against an invasion of the helmeted Tactical Patrol Force. The elite police squad had shut down one of their private gay clubs, the Stonewall Inn at 57 Christopher St., in the heart of a three-block homosexual community in Greenwich Village. Queen Power reared its bleached blonde head in revolt. New York City experienced its first homosexual riot. (Emphasis added) “We may have lost the battle, sweets, but the war is far from over,” lisped an unofficial lady-in-waiting from the court of the Queens.

“We’ve had all we can take from the Gestapo,” the spokesman, or spokeswoman, continued. “We’re putting our foot down once and for all.” The foot wore a spiked heel. According to reports, the Stonewall Inn, a two-story structure with a sand painted brick and opaque glass facade, was a mecca for the homosexual element in the village who wanted nothing but a private little place where they could congregate, drink, dance and do whatever little girls do when they get together.”

The article goes on to link the Stonewall Inn to the Mafia, which was a common excuse to raid gay clubs.

In the late 1960s protests were happening in the Civil Rights Movement and the anti-Vietnam War movement. It was a time rich in civil disobedience. Judy Garland, a drag queen icon, had just died 6 days earlier. And on this night, these proud and strong drag queens were just NOT HAVING IT!  They did not tolerate one more raid on their privacy and grief. They fought back.

Tensions between New York City police and gay residents of Greenwich Village erupted into more protests the next evening, and again several nights later. Within weeks, Village residents quickly organized into activist groups to concentrate efforts on establishing places for queer folk to be open about their sexual orientation without fear of being arrested.

A year later, on June 28, 1970, the first gay pride marches took place in New York, Los Angeles, San Francisco and Chicago were organized by the Gay Liberation Front commemorating the anniversary of the riots. With this spark, LGBTQ found its identity as a community and created newspapers, magazines, health clinics, churches, specialized businesses. Today, Gay Pride events are held annually throughout the world toward the end of June to mark the Stonewall riots.

Let us all continue to fight to preserve the freedoms we have won and to continue liberation efforts around the globe. 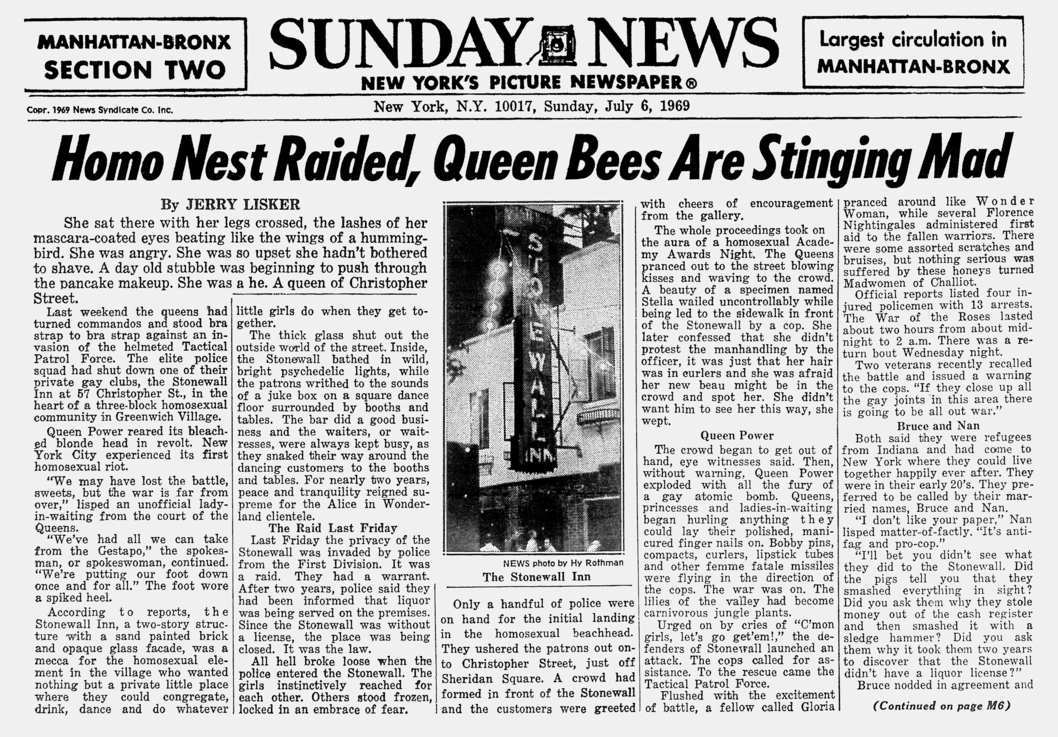