This blog series on LBGTQ Genealogy will now shift focus to genealogical software, both online and offline. Often, for our families, available software doesn’t fit. Software is written hetero-centrically, for a cis male / cis female coupling that have biological children. To demonstrate, I will tell you about my immediate family constellation and the difficulties I’ve had forcing a fit into the software.

We have two children; we adopted Julian and we had a surrogate mother for Rosalinda. When adding children to our marriage, I must decide which one of us is going to be the “father” and which one will be the “mother.” Although we can be a same-sex marriage, the software is still expecting opposite gender parents.

But our family, like yours, is larger than just the 4 of us. 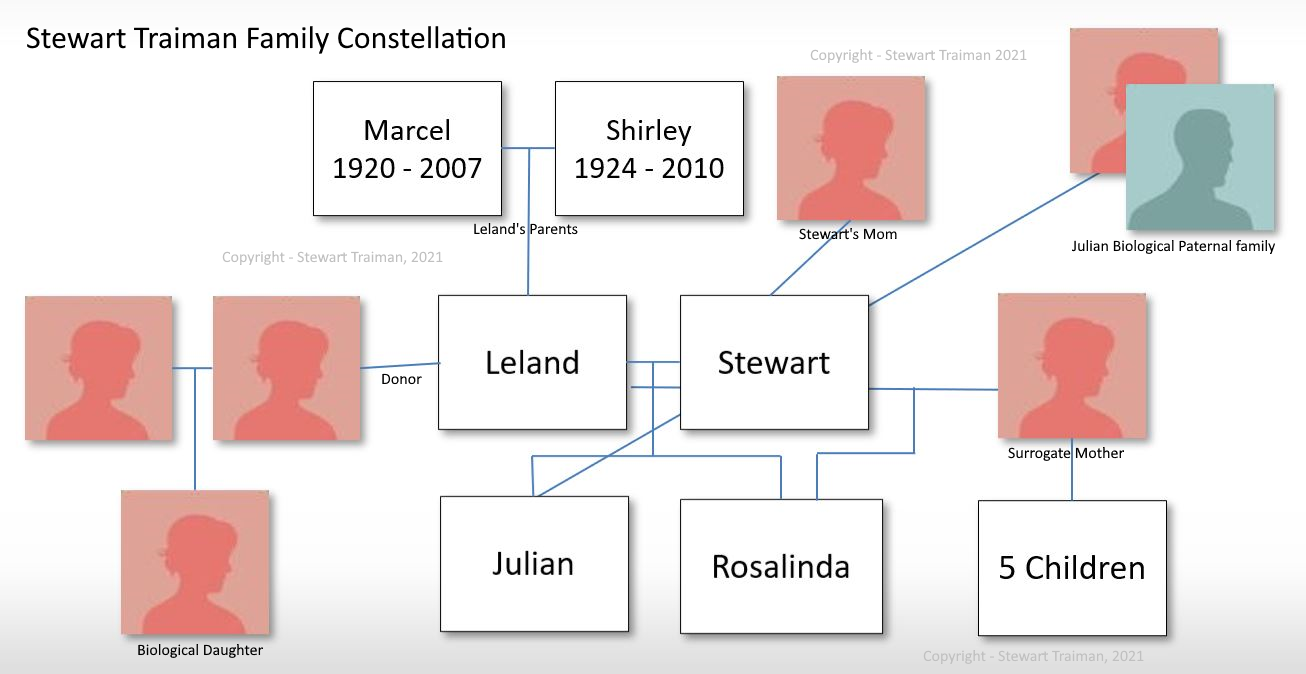 Leland was a sperm donor to a lesbian couple and has a biological daughter. She has two mothers; Leland was not a parent to this daughter. Software focuses on DNA/biological relationships and it is easy to designate who the biological parents are for this daughter. But what of the non-biological mother? To designate her as a step-parent would be wrong. To designate her as an adoptive parent, though technically correct, does not have the same gravitas. The non-bio mom is no more and no less a mother to that child, starting on the day the idea of her was conceived.

Although Leland was not a parent to his biological daughter, his parents, Marcel & Shirley were very much her active grandparents. Just like my mother is an active grandmother to my children, yet there is no biological connection.

Some years ago, Julian contacted his biological paternal family and actively visits his uncle and his great-grandmother. Our families are now connected. Rosalinda’s surrogate mother has had 5 other children, all of which are Rosalinda’s half-siblings. We are in contact with most of her children’s families.

Leland has two biological daughters. Both are through sperm donation but in different circumstances. Software defaults to calling both biological mothers his “spouse”, which is incorrect. I am the only spouse he’s ever had. There is no place to designate a donor or surrogate relationship.

I do not have biological children. Six generations from now, when my children’s descendants put together their family trees, will they bypass me on their DNA based trees? Will they not know of the significant role my mother played in the lives of their ancestors, her non-biological grandchildren?

This makes for an extraordinarily complex family tree.

To do that software and tools need to move beyond hetero-centricity. Family Group sheets need to allow for more than two parents to give a full picture of a person’s life. Ahnentafel reports need to expand from just DNA lineage to include full family history. Labeling, icons, and relationship descriptions should not be restricted by assumptions of heterosexual couplings. Non-LGBTQ blended and adoptive families have similar problems with software.

In the rest of this blog series, I’ll focus on specific examples of our changing world. Though LGBTQ folk have always been with us, it has never been more obvious than today. It is past-time for software to recognize all families.

What have your challenges been with software? Please comment below.