From Newspapers, we also can find the ever-helpful obituary. I love a good obituary that takes the trouble of listing all living relatives and all pre-deceased relatives. Sometimes there an unexpected answer in these details, such as half-siblings or blended families. What was once confusing relations in a tree can become crystal clear because a person who was there at the time is telling us in the future how things were.  A time encapsulated data nugget.

But then there is also a fair number of detail-less obits that frustrate me.  They just say someone died, no place, no dates, no relations. Please go to the trouble to record a brief, yet detailed, synopsis of a person’s life events.

In the 21st century writing an obit seems to be going out of fashion. But I hope the practice will see a revival.

Obituaries can also be clues to a person’s sexuality. Here are two examples of obituaries for queer folk.

The first example for Robert Bagot mentions that his “longtime partner” Louis Young preceded him in death.  The fact they lived in Montrose, a gay neighborhood, also is indicative of homosexuality.  We’ll be talking about Gay Neighborhoods in a future blog post.

In the second example, we revisit Anne & Adele. You’ll remember them from the blog post on the use of the term partners in the census. Anne and Adele were listed as partners in the 1915 New York Census.  The second image is that of Adele’s obituary in 1932. It reads, “an intimate friend of Miss Anne Clark, who had lived with her for the past 38 years.”

When you come across an obit look for other code words like “lifelong bachelor”, “longtime companion”, “devoted friend”.

As you know the AIDS epidemic has taken the lives of many queer folk. You will find many obituaries for residents of the San Francisco Bay Area online.  The GLBT Historical Society and the Bay Area Reporter (B.A.R.) have partnered to digitally publish obituaries since 1972.  Each is a story of strength, love and support. 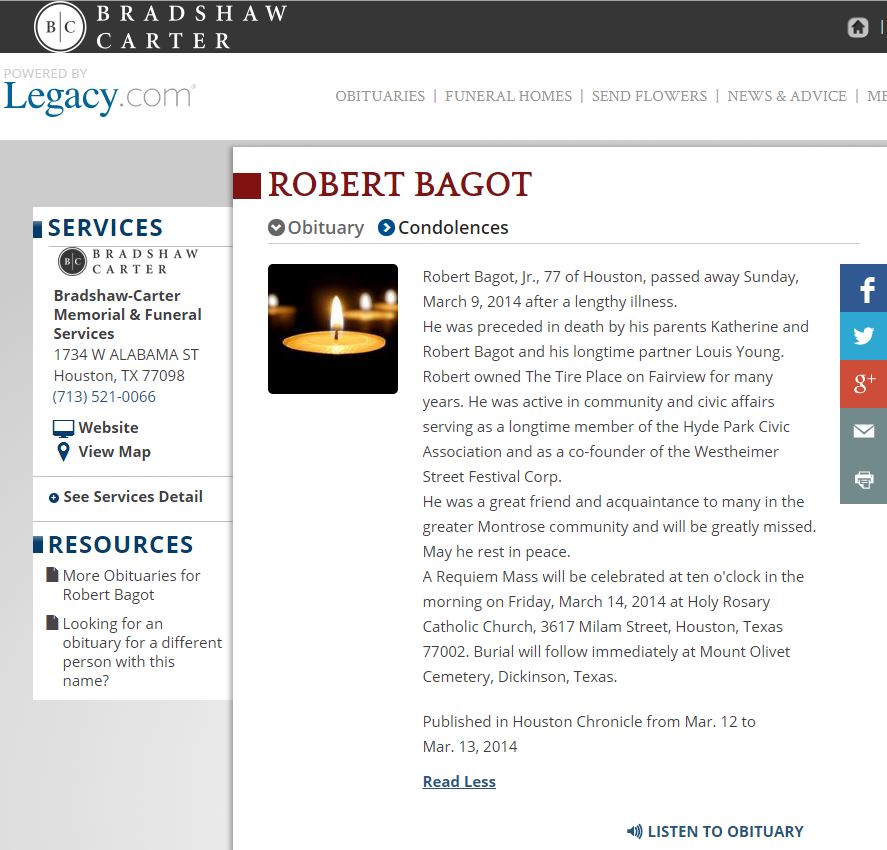