The term “Partner” was used in State and Federal census enumerations in the 20th Century. An example is the 1915 New York census entry for Anne Clark and Adele Albro, enumerated as Partners.

Using Steve Morse’s census search tool, I was able to quantify how many times the term partner was used in 20th-century census records.  It appears anywhere between 78,000 to 185,000 times.

However, investigating these records leads to several examples where “Partner” was used for convents. In London, Madison, Ohio in the 1940 U.S. Census we find an example of four nuns living together. The first is listed as “Head” and the others are “Partners”.  Sister Mary Charles is enumerated as head of household. Sister Mary Baptist, Sister Mary Anastasia and Sister Mary Paschal are all listed as “Partner”.

The term “Partner” is used to describe the relationship of movie stars Randolph Scott & Cary Grant in their 1940 enumeration. (See Image 2).  These leading men met in 1932 and lived together for 12 years in a beach house dubbed “Bachelor Hall” by powerful Hollywood studios, which controlled their public and private lives. They always denied being lovers though rumors about their relationship persist. In the 1940 Census, Randolph is the Head and Cary is shown as Partner. (See Image 3.)

As with all evidence, genealogists will need to interpret and analyze each piece for ourselves and our family’s story. The Enumeration of Scott & Grant is consistent with instructions for Census workers. Only considering other evidence will we be able to put “partner” into the appropriate context.

The term “Partner” is not a completely reliable means of identifying same-sex couples in the census, but it has been used by enumerators, so look for it in your searches. 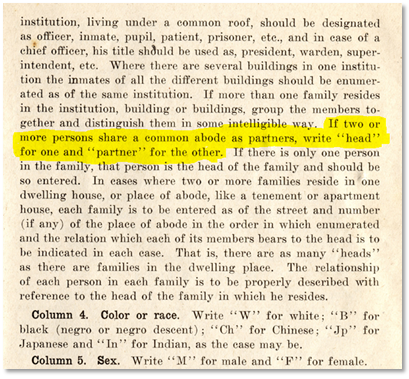 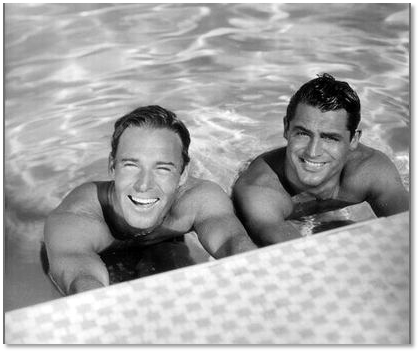